On 11th of February the Office of the General Prosecutor of Bulgaria announced on a press conference that a ban on Bulgarian National Union (BNS) will be demanded from the court. Claims on which this demand is based are that our organization is acting as a paramilitary formation, that we are openly propagandizing antisemitism, discrimination and violence and that our activities are against the laws and the Constitution. None of this can be proven with hard evidence in the court by the Prosecutor’s Office. All of our activities, our propaganda, the structure of our organization and our uniforms are strictly in accordance with the existing laws in the country. That is very well known to the authorities but despite of this, a lot of effort will be put to try to ban our organization and to sabotage our work.

This is happening just a week before Lukovmarch – the biggest annual nationalist event in Bulgaria, hosted by our organization. It’s popularity is growing every year and it gathers not only thousands of Bulgarian nationalists, but many comrades from all over Europe. That is one of the main reasons for our organization to be under attack. The other is the creation of Alliance Fortress Europe (AFE) – the project we started together with our comrades from Germany (Die Rechte) , Hungary (Légió Hungária), Czech Republic (Národní a sociální fronta), France (Les Nationalistes) and Poland (Szturm). This enraged even more the anti-national forces that are trying to stop us for years.

The announcement of the General Prosecutor’s Office is part of a large and well coordinated attack on our organization. For several years the mayor of Sofia is doing everything in her power (even violating the law) in her attempts to ban Lukovmarch. Every single time we won the case in the court (we have won the case for 2020 too). So the next move of our enemies is to try to ban our organization. They target not only the organization but us personally to. After the announcement in April that Alliance Fortress Europe was created, our leader was guest in a popular TV show. For some of his words a coalition of leftist and zionist organizations send complaint to the Commission for Protection Against Discrimination and case was opened against him (currently in progress). For the investigation of our organization was appointed not ordinary investigative body but the State Agency for National Security (the intelligence service). Our enemies are desperately trying to create a negative and scary image of us in the media, presenting nationalism as something bad and dangerous. But their efforts have the opposite effect and the public support is growing.

Who is behind this attacks masked as an institutional acts? They are mainly inspired by the zionist lobby presented by two organizations – “Shalom”(those members of the jewish community connected to the communist regime and it’s crimes against Bulgarian nation) and the B’nai B’rith masonic lodge, pushing the anti-nationalist, globalist agenda. On international level, they are supported by the World Jewish Congress (that demanded last two years Bulgarian prime minister to take actions against Lukovmarch). Their allies are the network of liberal extremist NGOs supported by George Soros’s ”Open society”, useful leftist idiots, the Socialist party and all the liberal parties in the country.

Despite this attacks, we are getting large public support and this will be revealed very soon. We also want to thank for the support to our comrades from Alliance Fortress Europe and all other European nationalist organizations that have shown solidarity!

We assure you that Lukovmarch will be held, no matter of the circumstances! They may try to ban our organisation, but they can’t break our brotherhood. Our struggle is not only for our own nation but for our Europe and our Civilization! 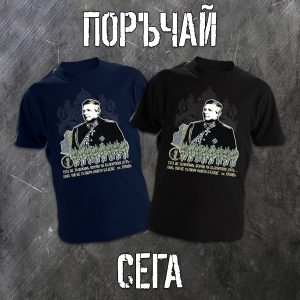